In a recent interview in Creative Camera Susan Butler, curator of “Shifting Focus” pinpointed its central premise as the “construction which begins before the camera is even picked up” that is how a range of constructions within photographic image making are articulated with contexts or situations existing in the ‘real world’ which are not merely ‘there’ or ‘natural’ but are culturally produced. These, to quote from Norman Bryson, pre-empt and decentre our vision through “paths and networks laid down in advance of our seeing.” The insertion of this screen of social relations and disourses inscribes the Lacanian notion of the Gaze and the positioning of the self visa vis the Other.

In the current exhibition the role of the photographic representation in this prescriptive and structuring network is explored through a spectrum of work by women from Europe, North and South America and Australia. Implicit in this is the notion of woman as predominantly subject in western patriarchal culture to the male gaze and the consequent need to unpick the ideological codes which underpin such a position. The catalogue essay stresses woman as the agent for the ‘ruin of representation’–ie. as that through which the visual conventions that position both the viewer and the viewed can be exposed.

Many interrelated issues and debates are touched upon. These have their origins in the late 60’s or early 70’s. Yve Lomax’s The World is a Fabulous Tale, (1987/88) could be taken as the leit-motif for much of the show–filmic quotations formally and metaphorically both invite and defy narrative. The framing and relationship on the wall of the multiple image panels and of the images within them dispel any attempt at coherence– ‘the look’ has to make leaps and unexpected bounds–making a nonsense of any residual notion of the frame as an equivalent to a window on the world as we think of fixed meaning but also of any meaning within fixed enclosure or frame. Like words in a sentence the images make no sense in isolation, they can only be defined through a context and it is the generation of this context which all the work in the show attempts to expose. The use of re-photographed photographic images, unifying monotone colour, and integration of surface patterning photographed from every day artifacts are ploys which emphasise the screening (and screened) nature of vision. Representation is not an illusion of something else which signifies ‘truth’ but a horizontal assemblage of ‘bits’. However unlike the anamorphic skull in Lacan’s example of Holbein’s The Ambassadors there is no presupposed viewpoint for legibility.

Lomax’s work bears an interesting comparison with that of Barbara Ess. She distorts moments from the familiar and ‘fantastic’ scenarios of television, film and magazines with the use of a pinhole camera. ‘Normal’ perspective (a socio-political construct which does not correspond to the curvilinearity of binocular vision) is lost–there is no middle or foreground and the rectangularity of the framing edge is purely coincidental. Filtered monochromatic’ colour and the contingent surface interference and damage of specks of dust and dirt emphasise the flatness of the representation whilst the image itself evokes the depth of that unclaimable hinterland between the subjective and objective world leaving it open for the perceiver, much as Lomax’s Fabulous Tale … has many endings. Susan Trangmar’s Untitled Landscapes, 1986, borrows from conventions of popular landscape and documentary picturing. In it the assembling of apparently disparate and random locations in effect suggests a narrative, but one over which the singular omnipresent musing female figure (viewed only from the back) has some mediation. She never meets our gaze, just as the subjects of Sophie Calle’s Blind (hung adjacent in the Serpentine showing) are physically unable to do so, but one feels the strength of her resistance to positioning and the somewhat ironic desire to dream as she transverses the cultural and ‘natural’ landscape. 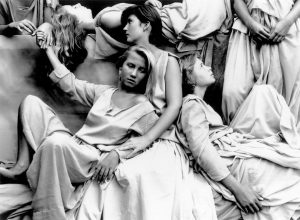 Allusions to film and confrontation with the question of narrative, (in this case whose narrative?), are found in the work of Mitra Tabrizian with its highly dramatised sets for the exposure of racial, class and sexual tension, most often of an unacknowledged and ‘unspoken’, but assumed kind. The work appropriates an interesting genre of realism. Anne Testut’s staged enactments of the hierarchies within a French upperclass family, likewise highlight the unspoken. A voice for a private space within such constructs of society is to be found in the work of Hannah Collins with her willful transgression of a dulling and lonely environment, in Graciela Iturbide’s ‘framed recording’ of a matriarchal society and perhaps most overtly in the work of Lynne Cohen and Candida Hofer. The latter two both present a variety of cultural spaces–Cohen in a cool clinical claust rophobic manner which can only accommodate idealized representations and where the closed vistas highlight the shallowness of cultural conditioning and aspiration. Hofer’s world is one of great social interaction and more intimacy. It works almost in opposition to that of Cohen-a variety of cultural and historical styles and the often oblique angle of the viewpoint suggest the possibility of something beyond the frame whilst at the same time imposing the weight of history and conventions of the present.

The specific position of women within cultural and sexual politics is addressed directly in the work of Anne Ferran, Ingrid Orfali, Laurie Simmons and Sarah Charlesworth. Simmons and Charlesworth appropriate the tactics and images of the mass media and advertising, whilst exploiting, seductively, contemporary high art conventions to comment on the placement of women and the channelling of desire (the absence which is integral to looking). Ferran erodes and distances more personal images which could verge on the erotic as she untangles for questioning, myths surrounding female sexuality. Orfali’s bold use of stereotypes– social and pictorial–has a testing edge of provocation (so much so that it obviously hit a raw nerve in the water tight world of the Royal Park Keepers, who asked for the poster image Wemen, with its crystal winged phallus to be covered up, presumably so that it would not offend ‘the page three reading public’). The staged and literally made-up stereotype is the subject of Katharina Sieverding’s series of self portraits–her eyes in their calculation and desperation never quite meets yours, again as those of Sophie Calle’s Blind. This pillaging of the photographic comes full circle in the deconstructed and exploded images of Shelagh Alexander and Astrid Klein. In both artists work the normally pre-supposed legibility of the photographic image and its locus within a positivist framework is radically denied, not through the exposure of codes, but through the dissolution of the image itself and a first order exposure of uncertainty. They are images which posit no frame.

The exhibition undoubtedly contains some interesting, challenging and important work but it also fails as an exhibition. It is a pity to accommodate compromise– one can ask first and foremost why only women and secondly why this selection? (One only has to think of pioneering work in critical analysis of the field of the gaze as the two way mirror and time delay videos of Dan Graham in the late 60’s; that of Victor Burgin informed by psychoanalysis in the seventies, or the more recent work of Jeff Wall to realise that the discourse is not confined to the female artist). A conscious decision was made to leave out some of those artists who had been seen more widely in Britain–notably Cindy Sherman and Barbara Kruger. The show is actually travelling around the country to places where the audience is no more likely to have seen their work than anything else in the show. The work by Iturbide, Calle, Trangmar, Klein, Cohen, Lomax has all been exhibited in the UK recently and seen by the informed audience that would have seen Kruger and Sherman. Are the organisers unintentionally contributing to an already chronic metropolitan/regional divide? Why the placing of Susan Hiller and Jo Spence in the historicizing context of the catalogue but not in the exhibition itself? Why no time based or installation work which so often broaches the decentring of the subject and breaks 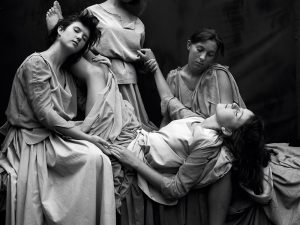 down the priviledge of the viewer?

Criticism aside, the problems of bringing together an international touring show are immense-dealers are loath to see work travel to public, non-commercial venues over such a long period and time-based and installation work is almost impossible to tour successfully. Expense is prohibitive, realistic touring fees exclude most regional galleries. Given the difficulty of doing the job properly should it have been less ambitious and born less of the mark of a ‘committee selection’? It is all too easy to criticise. Much of the work retains its poignancy regardless of context. It highlights the wealth of material produced by women working with the photographic image and although I was left looking for a slightly tougher edge, I also welcomed the opportunity to reassess the statements which make this possible. “Shifting Focus” provides an essential comment on 150 years of photography, the catalogue a much needed overview and reference tool. Above all it lays the foundations needed for a comprehensive survey show.

1-16-05 I haven’t had very much creativity lately as I have lost my best friend. Hope to get back to doing some creations in the near future. I’ve added Quiet Nights to the Figure Studies Gallery. Used Photoshop extensively.

11-26-04 Happy Thanksgiving! I’ve been pretty busy with projects lately and have neglected to put up any new creations. I hope you enjoy Alienated added to the Fantasy Gallery. Rain Dancer to the Figure Studies and Woman’s Intuition to the Emotions Gallery.

05-30-04 Added Windtalker to the Emotions Gallery. She was chosen for the Daz 3D Gallery for May.

11-01-03 Added Photoshoot III and Pearl to the Figure Studies Gallery. Pearl was inspired by the great artist JMW Chranoska. Thanks for viewing.

11-01-03 Today is the day in which the new book Virtual Humans by Peter Plantec is released. A totally different concept for 3D books which gives you all the background you need in order to create your own virtual human. The Poster art for the book is Simone! If you haven’t read the reviews take a tour of the virtual human site! You won’t be disappointed. A book worth having in your collection!

10-31-03 Happy Halloween! I have much to share with you. I was blesssed to have some of my art in a book entitled Femme Digitale by Michael Burns. Actually, the UK version has my cover art of which I was very honored. A wonderful tutorial book made up of a wonderful group of talented artists.

6-9-03 Well it’s been awhile since I’ve posted anything. The last four months have been overwhelming in as much as I have hit a wall which has prevented me from creating. I’m sure we get these blocks once in awhile but I’m slowly coming out of it. I have added a new creation in the Figure Studies Gallery entitled Claire. Enjoy and be blessed!

2-19-03 Added a new creation to the Figure Studies Gallery called Simone. Hope you like it. Be Blessed!