Art works by women must become visible so that their exhibition in historically representative or contemporary exhibitions can be secured. The fact that the establishment of an academy or museum of women’s art can be seen as an alternative to the demand for quotas, or that ‘integration’ and ‘autonomy’ are” seen as irreconcilable, has a negative effect on women’s capacity to act. Women must be able to work in autonomous as well as established institutions.

A women’s Academy/Museum also makes sense to me because the women’s museum in Washington has proved to be a positive effect on the art market for women. Since the opening of the museum many more private galleries in Washington are interested in showing the work of women artists.

Furthermore, an institution of this kind would be the place to provide the historical foundations necessary for the discussion of feminine aesthetics. In the last ten years aesthetics based on the perception of femininity as emotional, spontaneous, physical, etc. have been labelled feminine or feminist. These perceptions are neither new nor original nor emancipatory. They do not differ in the least from the traditional male definition of feminine. An academy for women would offer students and teachers the opportunity to carry this discussion further and deeper, to abandon the established definitions and dare to come to an authentic concept of the feminine. This task would include an historically substantiated investigation of the gender question in art. It could offer the foundation for the refutation of male universality in the annals of aesthetics and art history, and for the development of new criteria for artistic creation. Such a programme can only succeed if it deals with the relationship between the sexes. It is impossible to define what masculinity and femininity are. We cannot grasp them by attributing certain qualities to them. What defines gender is the relationship to the other sex. A ‘relativity theory of the sexes’ leads to the realisation that ‘general’ aesthetics, that is those determined by men, are no less absolute and therefore just as relative as female aesthetics. Seen in this context, art by women appears no longer as an overdue correction to history, but as a necessary prerequisite for aesthetic understanding as such. Thus it has the general validity (it no longer just is specifically female) which male-dominated art and aesthetics have claimed until now. 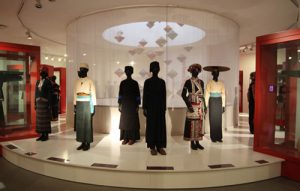 To communicate and demonstrate this general validity in the existing establishments (academies, museums, universities) seems to me impossible. New thoughts need new organizations and institutions.

Edited English text of a translation from German by Gunhild Muschenheim

THE NATIONAL MUSEUM OF WOMEN IN THE ARTS WASHINGTON

Opened in 1987 and housed in a former Masonic temple the permanent collection of approximately 500 works are displayed on seven floors. The core of the collection came from the Museum’s founders Wallace and Wilhelmina Holladay, who had privately owned a mass of women’s work in a variety of media.

Funds for the museum were raised by national subscription which included donations from private individuals as well as large corporations. The museum continues to rely on these sources of revenue and on their sponsors in the shape of Philip Morris Companies Inc.

The Museum houses a library, a resource centre, and a large auditorium. It also has an active education department and organizes travelling exhibitions. Prestigious temporary exhibitions are regularly held. ‘Elizabeth Frini, Sculpture and Drawings’ runs until 4 July and later in the year the Museum will host the Scottish show ‘Glasgow Girls’. From the introduction to the 1987 book of its permanent collection, Alessandra Comini sets out its purpose: ‘The permanent collection … serves a revisionist–and coincidentally feminist–cause, ensuring that the whole story of art be told, and insisting that the definition of art be broadened to include the “Anonymous Was a Woman” arenas of human endeavour. It presents not a footnote to the history of art, but a supplement: not a ghetto, but an extension.’

‘The Women’s Museum’s first goal: to liberate art and culture from limitations and standards of societal norms–areas of art where women have hardly participated and have been represented even less. The areas concentrated on are: the construction of a complex exhibition programme, the availability of research and archive facilities documenting women in art and all this with the help of an original form of management.’ (Frauen Museum Statement.)

The Frauen Museum was founded in 1981 from several groups of women artists, writers and historians who had been working together and organizing exhibitions since 1973. In 1981 the city of Bonn provided the groups with a 3000 square-metre storage warehouse. There was no public funding, however, and private donations have kept the Museum and its collections going. The museum organizes a great number of temporary exhibitions (90 since it opened, including the work of 600 artists). Twice a year it holds larger theme exhibitions around which a series of events are held. The Museum is ranged on three floors, including a studio space with nine resident artists. The Museum also houses an archive, a catalogue library, and a permanent collection of works by women. Further information and exhibition programme available from the Frauen Museum, Im Krausfeld 10, 5300 Bonn 1, West Germany. 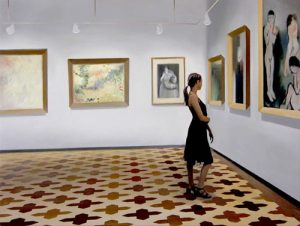 Along with the Frauen Museum and the Women Artists Slide Library, Das Verborgene Museum is a member of IAWA (International Association of Women in the Arts). The Museum was founded by a group of women artists and art historians in 1986 as a result of their collaboration on a large exhibition of women’s work in Berlin entitled “Das Verborgene Museum” (The Hidden Museum). The project had been initiated in 1984 by Gisela Breitling (author of the preceeding article) and Evelyn Kuwert. The Museum which carries the name of the original exhibition has been funded in its activities through private donations, though this has left it in a vulnerable position.

The aim of the Museum has been to provide a full education programme based around its historical archive on women’s art, from which the Museum produces an annual publication of research. It also organises three to four exhibitions a year. Currently on show is an exhibiton of the East Berlin artist Heidrun Hegewald, It runs to May 27 and will be followed by further exhibitions of East German work; a development about which the Museum is very excited.